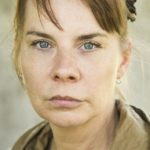 Phil met Bernie C Byrnes at a Rural Touring conference in 2015 and it was an artistic match there and then.